Tourism and Travel to the Greater San Antonio Area 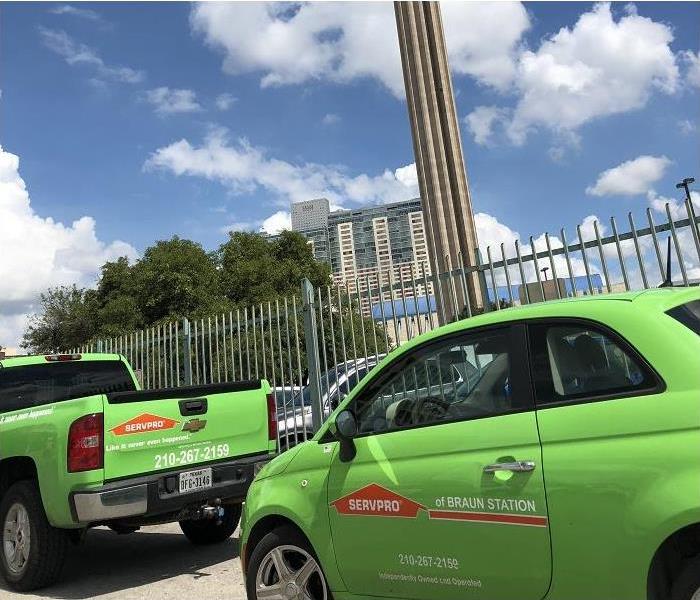 SERVPRO loves San Antonio. We are always ready and prepared to handle your water damage.

Learn About the Attractions, Culture, and Career Opportunities that Attract San Antonio Visitors and Keep Them Here

There is an allure for tourists and travelers to see San Antonio and its immediate suburbs for many reasons. UNESCO World Heritage Sites such as the Alamo and the San Antonio Missions National Park can help attract those who want to learn and experience Texas history. In addition to our region's history, culture, and heritage, San Antonio remains a unique city in the country, growing consistently since its forming in 1718.

A History as Broad as the State

As a settlement and Spanish mission, San Antonio dates back into the early portions of the 1700s. The city would celebrate its 300th anniversary in 2018, maintaining its status as the oldest municipality in Texas and among the south's cities. Five structures still stand from the original mission from the 18th century. The most famous and memorable to San Antonians, and Texans in general, is the Alamo.

San Antonio would be the site of a battle still relevant to the Texas people today as it was then. The mission structure would be the site of a 13-day siege by the Mexican Army, resulting in a massacre of Texans standing their ground and fighting until the end. This act of bravery and defiancé would spark a fire throughout Texas for people to join the newly developing army against the formidable Mexican forces.

Many have found their way into Bexar County and Texas's central/southern regions for their stations with their military branches. Much like times before even the American Revolution, San Antonio has always been a haven for the military of whatever controlling power ruled over the territory, whether it was the Spanish, Mexican rule, or our own brief time as a country before joining the United States. The respect for the military in the state and country is a point of pride for San Antonio and its suburbs like Universal City.

While many have affectionately named the area Military City, USA, that name has been appropriately earned with a total of three Air Force bases and an Army post in the immediate area. Hundreds of thousands of persons and their families have gotten the opportunity to experience San Antonio through the United States Air Force's basic training requirements. Lackland AFB serves as the primary training facility for recruits.

Beyond the extensive history dating back centuries for both the municipality and the entire surrounding areas, the city is known for its development of the structures around the San Antonio River moving directly through the center of downtown. While this would ultimately modify the layout of many skyscrapers and office buildings throughout the city's main avenues and streets, it also paved the way for one of the most iconic and memorable shopping and dining experiences you can have in Bexar County.

The river plays an integral part in the city's festivals and celebrations, accentuating and highlighting the subterranean stores, restaurants, and boutiques that make up the gorgeous River Walk. In the spring, the city hosts the Fiesta San Antonio with a River Parade with flowered floats. These stone pathways lining the river's shores connect pedestrians to many attractions throughout downtown, including the Shops at Rivercenter, Marriage Island, the San Antonio Museum of Art, and our most famous attraction and World Heritage Site, The Alamo.

One of the alluring factors that have helped San Antonio be among the fastest-growing cities in the country for the last 20 years is its location. With the city's position between the capital and coastal communities like Galveston and Corpus Christi, day trips become more feasible. Also, the manageable distances between these bustling points can be beneficial to startup businesses and aggressive entrepreneurs. The same can be said about San Antonio's connection to the three other major metropolitan areas in the state, including Dallas/Fort Worth, Austin, and Houston through I-35, I-10, and I-45.

The climate is favorable for those that love the sun and warmth. Summers can get hot and humid at times, but that also translates into very mild winter months with few instances where average temperatures drop below a frost point, making growing fruits, vegetables, and all produce possible in most conditions. San Antonio also receives a fair amount of rain (more than 30 inches annually) to accommodate area farms and orchards.

Water damages can quickly spread throughout homes without the appropriate mitigation, and restoration steps are taken right away to prevent it. Our SERVPRO team is a foremost name in restoration for Bexar County and can often reach the scene within hours of the first notice of loss. The sooner mitigative actions begin, the less damaging water disasters are to the property and its contents.

Mitigation often hinges most specifically on efficient extraction solutions. Surface water poses the most direct threat to the property and your personal belongings after plumbing breaches and appliance malfunctions. Removing any water pooling can reduce the likelihood of absorption into porous building materials like engineered wood flooring, carpeting, baseboards, and drywall. Depending on the severity of these situations, our technicians utilize multiple tools to achieve water removal goals. Some of these instruments include submersible pumps, wet vacuums, and weighted extractors.

As general contractors certified through the state, our mitigation phase also encompasses vital repairs and construction tasks designed to protect your home. Controlled demolition removes degraded or deteriorating materials to provide a clean and stable foundation for replacement. Likewise, our experienced team can reach damaged utilities like broken water lines to install new connections, portions of pipe, or fixtures "Like it never even happened."

Water disasters do not have to be total losses for your home. Let our SERVPRO of Braun Station help with water mitigation for your San Antonio residence. You can reach us 24/7 at (210) 267-2159.