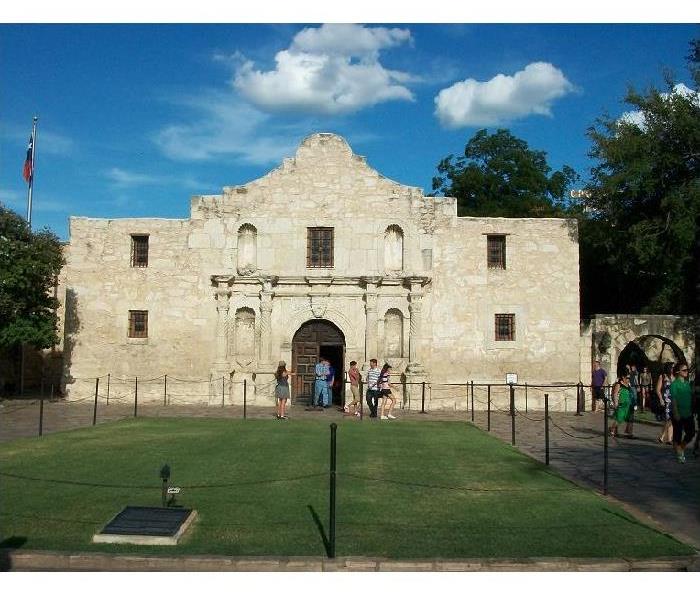 SERVPRO loves the history of our town. We are available 24/7 for your fire damage restoration needs.

San Antonio is one of Texas's top ten largest cities, with a burgeoning population of one and a half million residents. The southern locale is situated between Austin and Fort Worth's diverse metropolitan areas but retains its identity as an urban area of San Antonio- New Braunfels. The conglomeration of these three large urban regions is affectionately known as the Texas triangle. The locale has a storied colonial history from its original inception named after Saint Anthony of Padua, a missionary priest in 1691. The city contains a stunning five historical Spanish frontiers and several UNESCO world heritage sites from explorers of the eighteenth century. As a civilian settlement, the city of San Antonio dates to 1731. In the following centuries, the town became a battleground region with power transferring between Spanish and Texian forces several times. The most notable battle was the fall of Texian defenders in the Battle of Alamo. It was not until 1835 that the US decided to annex the region leading to the American- Mexican War.

Today, San Antonio is one of the fastest-growing cities in the southern region of America. The densely populated downtown district is famous for its historic architecture and bustling trade. North Central is home to some of the city's wealtheir inhabitants, while the South Side remains heavily populated by Hispanic residents. Part of San Antonio's growing population is due to the economic opportunities afforded in the local area. The Lady of the Lake University and St. Mary’s University on the West Side of the city provide nationally recognized education to thousands of students each year. At the same time, the diversified economy contributes a lot in terms of opportunity for graduates. San Antonio's leading sectors include healthcare, the military, oil & gas, and a thriving tourist economy. While it is not the most well-known city in Texas, San Antonio is the most significant banking district in the southern state, with Wells Fargo among the numerous Fortune 500 companies that headquarter in the city.

Things to do in San Antonio, Texas

Housefires account for billions of dollars’ worth of property damages every year in the United States. Our team of expert restoration technicians can help mitigate losses in your property and lead a recovery effort that returns your home to its preloss condition. The crucial aspect of conducting fire restoration is to pre-test materials in the house. Smoke can have unique properties which do not respond to all types of cleaning agent or technique. By pre-testing soiling in the home, we can ensure that our restoration causes minimal damage to your home and increases repair efficiency. We work closely with insurance adjusters to produce a timely quote and communicate with you throughout service to minimize inconvenience.